The old git didn't show up on the 4th and re-scheduled my driving lesson for the day after. He insisted on wanting to observe how I drive — because recently he received complaints about the other instructor being mean to the students and, being the proprietor, wanted to put things —erm— right.

Good grief. The irony of it. He turned out to be really horrid. He was also beginning to get physical which really bothered me. Like the nasty piano teacher I had as a child who would crush my fingers on the keyboard to remind me that I was making tons of mistake. He didn't hurt me or anything like that, but being the focus of such aggression was disconcerting, to put it mildly. He was also giving out contradicting orders — first by telling me to go very slow because I'm still a learner then to step on the gas and go over 50 kmh in streets with a 30 kmh speed limit. Duh!

Afterwards he asked me to be honest about what I thought of the other instructor... and —erm— if I wanted him to be my instructor from then on. I told him that actually I never really had any problems with my previous instructor and that I've been with worse ones in my life.

No way I'm getting near this guy again! If he insists I'll complain to his wife — who seems a nice person and acts as his secretary. Am going back to the previous instructor who, despite being too cheeky for his own good, tolerated my mistakes with a snicker and never once raised his voice above a mutter.

Special thanks to Sam who reminded me some weeks ago that my poems:

• Fish
• Allhallows Noon
• Love and Benny Hill
are already up in the August issue of poetic diversity.

Here's a picture of my niece in the private garden pool I brought straight from Italy. It is, naturally, made in China. Hee. 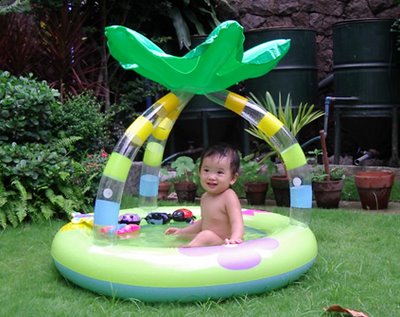 Sweet kid. When her video Barney starts singing I love you/ You love me/ We're a happy family// With a great big hug/ And a kiss from me to you/ Won't you say you love me, too? she'd tug at her mom or dad for a hug and kiss as well. It's the cutest thing I've ever seen — and she's only a year-and-a-half old. Tickles me pink to watch her.

congrats Arlene! My g-baby LOVES the pic of the baby, she's gorgeous btw.


Thanks for nagging me.

Sound like you're doing fine on all this driving stuff. You've learned enough to know when you're doing it right and that's the important thing.

Your niece is very cute. I love that pool! When my daughter loved Barney no matter where I was in the house she would start hollering "It's the I Love You song. It's the I Love You song!" And I would have to come running, sweep her up in my arms and dance with her. I hated that purple dino until I had my own little girl. She's 11 now, but won't let me toss her stuffed Barney. He lives secretly in her closet.

hey you, that instructor sounds awful! make sure you never have to have a lesson with him again. you are dangerous enough on your own, without somebody distracting you and making you nervous! *LOL*

the kid is cute. :) didn't she ever want hugs from you then? if you put on your purple coat and stuff a pillow underneath it, maybe she will mistake you for barney ... ;)

congrats on the pubs!

haha! thanks, k. as for the nagging, the pleasure is all mine. **grin**

i know what you mean, jude. barney's pretty ugly, isn't he — compared to the muppets? i grew up with sesame street so am quite biased. barney's lovable though... catchy songs, too. hee, from what i hear, no one child ever really outgrows barney.

mutt. why you! i'm not at all dangerous. unless armed with a kitchen utensil. well, okay. maybe also behind the wheel... but only when aggravated by a driving instructor who keeps on touching my legs. grunt. he did it with the woman before me, so it must be the norm with him. i hate that. italians, huh?

tsk. the silly kid points at me when asked who her auntie munster is. i mean really! i think it's because she saw me playing bite with the dogs. she did cry when they dropped me off at the airport and kept hollering my name. i must be the kind of evil that you love. bwuuaaaaahaaahaaaaa!!

Arlene, thanks for stopping by my blog ...:)

And Yipee a hundred times over for passing the theory test, you're half way there...I still tell people that one of the happiest days of my life was getting my driving test....:)) Bloody hell it must be a latin thing, I had an 'old git' that sounds just like yours :)

Oh your niece is adorable...in 24 hours time I'll be hanging out with my two nephews, one is 6 and the other chubby little red-head is 3...can't wait to have some fun with them...and get to go to a kid's cinema show...maybe 'Cars' or 'Ice age' or something like that (have been doing my homework on this so as not to get caught-out as a ' Not-in-the-know' Aunt :))

Anyway Arlene, sorry for ramble there...and also congrats on all your publication successes...terrific!

Avoid that instructor -- as I'm sure you will.

Hi Arlene...just wanted to say how much I enjoyed your poems in the new Poetic Diversity. I'm tickled to be featured with you. Congrats on all the recent acceptances. You encourage me to do more submissions.

Whoo-hooo lady, you just keep racking up the pubs, don't you? Congratulations!

Your driving updates are keeping me in stitches, and believe me, I need a good laugh these days. Oh, and pictures of adorable children in fantastic fantasy pools don't hurt, either!

liz!! have a great summer and a lot of fun with your nephews. i know what you mean about not knowing which are the "in" things for kids. my niece had to educate me on barney. hee.

hi collin! thanks for dropping by. admired your poems in poetic diversity, too. congrats on the awards for your debut collection -- i'm trés très impressed!!

thanks, sharon! hee, not as much as i'm racking up rejection slips though. the idea, someone once told me, is to have enough to wallpaper one's room/house.