and ready to leave. More or less. Will have to get all my stuff in some CDs now. Not sure if I'll be able to blog when I'm in Manila — with the dial-up access there, a webpage can take up to 5 minutes to upload.

The exciting life of a poetry editor:

I simply have to share Tim Green's worst week ever. Seems like a sound argument against unsound driving. And he's got photos to prove it, too!

There's also a note there that the Rattle site was hacked and went down a week ago together with their e-mail addresses. It seems fine now. Thought I'd share the news in case anyone submitted around that time and had problems.

But what excites me most ...

is yesyesyes! Max Winter's book, The Pictures is OUT!! Can't wait to get my hands on it. I mean, I've been waiting ages for a collection of his poetry. Here's an excerpt from one of my favorites, The ant.

The ant spends some time in the grass,
a long time, for an ant.
Two minutes, three seconds.
It then begins to emerge from between the blades,
head still, antennae moving slightly.
It is looking directly, we think, at the pastry crumb.
Interestingly, by the time the ant remembers
its original destination,
that destination point has shifted inexorably.

Simply adore the sense of distance and also the close observation of details — without ever sounding trite or forced.

juked accepted my poem, His Creepy Gorilla Suit for an upcoming issue. Really love this wacky, wild 'zine, so I'm quite delighted.

Boring holes in my head:

with shots taken in Vienna... mainly the Central Cemetery and Schönbrunn Zoo. Am rather fond of this statue — the expression of grief is so raw and cutting. Makes me think of that biblical woman turning into salt: 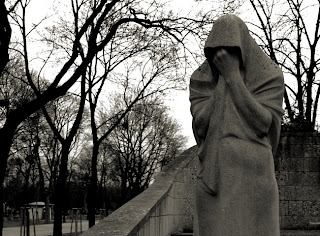 heeeee! when I received a fantabulous surprise mail from Valerie. She mailed me, for some inexplicable reason, a signed

copy of Nathan Leslie's short fiction collection, Drivers. I'm continually amazed by how the literary world is so vast and so small at the same time — because, incidentally, Nathan is fiction editor for The Pedestal where I've become a hired hand and he went to do a reading at Drexel University where Valerie works.

Here's a ticklish first paragraph from his story, Errand — which, oh dear, expresses so well my driving hang-ups:

Shelley really can't bring herself to drive. Not only does her mother have heart arrythmia and need care and daughterly nurturing, but also there is the matter of fear and dread, or dread mixed with fear or ambivalence, or whatever it is that makes Shelley's stomach curdle and her skin tighten at the thought of sitting behind the wheel and stepping on the gas peddle. Who knows why? Thank God for Milton Glencoe — who lives in her neighborhood and agrees to drive Shelley for work every day in exchange for gas and a hand to hold his coffee. Sometimes he doesn't even make her pay for gas, does he? He either feels sorry for her or he forgets. One or the other. He is quite forgetful, which Shelley thinks must make him a superior accountant. That's the way accountants are supposed to be, isn't it?

• Tori Amos: China
• Bjork: Army of Me, All Is Full of Love and Bachelorette
• Gianna Nannini: Meravigliosa creatura

... though not for long. Have got another week before I re-pack my luggage for Manila. Will be staying there till end of March. And then there's been family talk about going to California in May. Don't think I'll get much writing done this year... but hey, it is the Year of the Golden Pig (which comes only every 60 or 600 years, depending on how gullible you are) and I say indolence is a must. Hee.

Had a great time in Vienna with the udder spouse. We teeheeeeed and heehaaaaawed until late into the night — that you just have to thank god for deaf neighbors. Here's a pic called Shadows on Grass... which already hints on what we had been up to — which was really no good. I mean, we were standing there looking just like udder people. 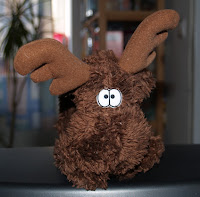 And here's her Rude-Olf watching us from the television top. I guess the look on his face says it all. He's supposed to have a red nose... but I swear it was no longer there when I arrived. Mug-shot probably mistook it for a strawberry during one of her lush states. She likes strawberries.

On Sunday I had two huge cups of mulled wine. Wheeeeeeee! My mind did some cartwheels halfway down my first cup, but it sort of stilled afterwards and I didn't feel tipsy at all. When I boasted about it to the husband, he commented that it's probably because my liver had entered a state of paralysis. Tsk. Not that he should talk. He and his colleagues were already drunk from excessive wine-tasting at the Nuremberg trade fair by 10 a.m.

flashquake accepted two oldish (revised and re-revised) poems, Lessons in Scrying Sarcoma and Nothing Heavier Than Silence for their Spring 2007 edition.

Sam tagged me into revealing my faves. By faves I mean films I like to watch again and again. Also love Orlando (from Collin's list), numbers 5, 6, 7 from Nicole's southern movies list and One Flew Over the Cuckoo's Nest from Sarah's list.

Okay, I'm skipping out of town... and seriously considering the prospect of skipping out on the 4-week course at the three candles workshop. Mind has gone shamelessly Patrician III and this little bunny is already on vacation mode. Wheeeeeeeeeee!

A note or two about PNG:

Some people have asked me what's going on with Poems Niederngasse... and I didn't know until a few days ago. Paco, the editor is finally wrapping up the next issue — which should be online in March. He's also looking for poetry book reviews and/or reviewers for the 'zine. If anyone's interested, feel free to e-mail him: editors(at)niederngasse.com (replace (at) with @).

... to the Italian Republic yesterday. Hopefully, I don't burn in their debts of hell for this.

Was tickled pink to have shaken the mayor's hand — once as a foreigner and then as an Italian citizen. He even handed me a small book containing the constitution and a small flag. The flag just makes me go teehee all over. Have told the husband that, from now on, I will greet him by waving with my tiny, tiny Italian flag when he comes home from work. And that during the next World Cup, I will hang my tiny, tiny flag outside our window... though, since our neighbors use officially huge flags, I'll probably back out at the last minute for fear of being ridiculed for the size of my —erm— flag. 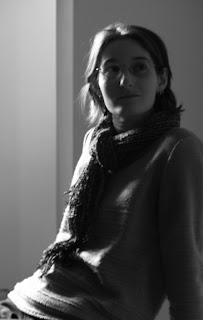 Was rather pleased when the instructor clapped his hands last night and said that this fluke happens to be a prime example of Rembrandt lighting — an effect that makes the shot appear as if natural light was coming from a window.

I took around 60 pics and only this one got the thumbs-up sign.

Lucky Wreck by Ada Limon. Her writing just makes me want to die because it sure feels like heaven (mine). Here's an excerpt from her longish poem, The Echo Sounder:

2
When she is eleven years old, she thinks
her body will be like that of a fish. She does
not want to decay before she uses it.
She is confused in the dark. She is never
scared. She is convinced that she can talk
to God and she asks him a question.
She does not get an answer, so
she makes one up. She believes the answer is:
everything stops, the food is in the mouth,
but the mouth is not there,
the water flows, but there is no creek.
She understands now that bodies can swing
from trees and whole families
can be locked up, that people die the way fish do
starving sometimes, gutted and tortured
by children who think they are being
scientific and responsible. She thinks God
must know this and therefore he is ugly.
She decides God is no good, but he must exist,
he must exist so she can hold him accountable.
She decides this and then forgets.

Woooooheeeee! Ain't she divine?! Love this interior monologue with its surprising twists and turns, plus mind-opening theistic-social observations.

Going to Vienna and Other Poetry

Well. I've booked the flight. I'm spending Valentine's Day and more over at the wife's place. Since the husband is scheduled to attend the World Organic Trade Fair in Nuremberg, I thought it was a good idea to take advantage of his absence and meet up with the other spouse.

If anyone of you will be around Vienna or are within a 2000-mile radius, do come over! You can stay at Mental's place with me while she works, does the cleaning and plays Emily Haines' The Maid Needs a Maid on loop. Well, she did (or was going to) say that her house is my house.

Really thrilled to announce that Other Poetry, a UK-based print journal accepted my poem, A Driving Student Intrudes on Fallen Nuts. They talk of a six-week response time at their website, but it was much longer than that. They do reply though — which is the important thing. Very nice professional manners, too!

Four Fires by Bryce Courtenay... and loving it! Borrowed it offhand from the library because it looked thick enough to last me a long time [oh, I know what you dirty-minders are thinking — be ashamed of yourselves]. It's rather Steinbeckish and Thorn-Birdish — but with a lot more humor, sass and ass:

We'd be walking, my hand buried in his big, calloused fist, him shuffling with his bit of a limp and me hopping and skipping, the wind rustling high and fierce in the big old gum trees above us, making a sound like waves lapping on some distant seashore, when, without warning, my granpa would let go a rip-snorter! A real tearing sound that could last five seconds with a stuttering cluster of encores to follow.
'Oh, my gawd, the hippobottomus is following us again!' he'd exclaim, turning to glance backwards and then waving his one hand furiously in front of his nose, 'Bugger's gorn again, but you can smell where he's been!' He'd point at the ground below his bum, 'He was right there before he escaped, did you see him, Mole?'
I'd shake my head. 'What's a hippo-bottom-us look like, Granpa? I'd ask, the game begun for the hundredth time.
'Smelly creature, big round bum like your grandmother's,' he'd confide, 'Don't want to meet him face to face, could blow a little fellow like you right off the mountain.'

Teehee. The reading gets scatological at times... but it is the saga of a family of garbage collectors. No kidding.
Posted by Arlene at 6:01 PM 7 comments: