Yikes. It's been more than month since my last confession... I mean, blog entry. I AM NOT DEAD. I have been Facebooking where I am the mayor of a small town. Oh yes. I even have an electric sheep. I may also be Twittered though I haven't exactly understood all the mechanics of making sounds every half-hour.

It was such a fab surprise when editors announced that they've nominated my poem, Like Closed Eyes for the Pushcart Prize. It's my 9th ever (yikes) and the 2nd (yay) this year — the first nomination (8th) coming from Juked for Anima Nera, one of the poems that received the 2008 Juked Poetry Prize... a poem written two years ago, incidentally, after a post-Christmas hangover. Hee.

• Three poems in Seven CirclePress: Ants, How Did Her Garden Grow and Phantom Limb.

• Am tickled that the Pirates issue of Painted Bride Quarterly is now online — just in time for the holidays. I have poem here with private parts in 100% gang green. Arrrrrrr!

• blossombones accepted two poems, So What If It's a Red Dress and Celebrating the Therapist for their Winter 2009 issue.

Are you done shopping? Have you finished wrapping all the gifts you've bought? Have you taken a shower? Is it the fog or are the windows just dirty? Are you sure you have clean clothes to wear for the party? Is that the smell of Santa's beard burning in the open fire? Why are all these liquor bottles empty? 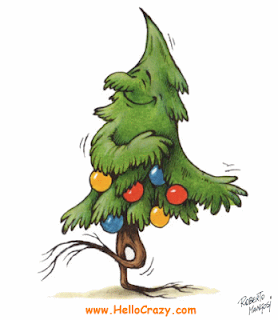 Have a merry dance through the ballsy holidays everyone!

I always look forward to seeing who else is included in journals that I am able to sneak into, so I was very happy to see your name in the latest issue of Merge. Leak was especially memorable.

Congrats on the acceptances and publications!

A question--I don't quite get what Twitter is. What do you use it for?

Arlene, merry crimble...
and Twitter - the name is a howl!
I'm all superpoked-out of it...hope to re-charge soon, ; )

and the heartiest-wows! on the pubs.
x

Welcome back in the blogmaze Arlene.
Has Bora driven you back? It has come al last, shutters banging,empty flowerpots crashing, waves like rising rattlesnakes...
And only yesterday in the Prealpi I found myself on a snowpath ( an account of that is in my blog) after almost sneezing my life away at home and after only two days of holidays out of my trench or trail and its clamours...
best, Davide

Congratulations on your nominations!

You have been very busy and congrats on the second nomination for the Pushcart Prize. Wee. You must be excited.

Thanks for your kind note about Piano. I appreciated it.

I hope you had a great holiday and got some great goodies.

i enjoy your blog tremendously. congratulations. hopefully you are still blogging.

read your work on identity theory.