Or almost. Got back from LA last Friday night and have slowly gone through my stack of TPM subs. Yep, I'm the editor on duty again for the December 2008 issue of The Pedestal Magazine. On that note, I should like — hinthint — to receive more nonlinear, surreal, experimental poetry. You have until December 14 to send those puppies my way. I will know who hasn't been submitting. You will not receive a note from Santa. You have been warned.

Also, I've finally gotten myself into Goodreads. If anyone wants to link up, just hoot. I am, at the moment, friendless... but already armed with Freud. Hehe.

They actually went better than I feared. For one, we had fantastic supporters in the audience. For another, I had a fab time meeting so many poets/writers for the first time — people I've known over the internet casually for years and never dreamed I would one day see in the flesh. Plus, Valerie and I even managed to sell copies of Bundles!

The university readings were a bit harder because of the Q&A afterwards. Because of some pointed questions from the students, I realized that our Bundles book is full of criminal intentions — from crank callers to stalkers, from pirates to extortionists... and no one has bothered to notify the cops. Someone asked Valerie if she had a rough childhood, and I almost heard a sigh of disappointment when she said no. I was asked if I had personal dealings with stalkers or being in prison... whereupon I admitted openly that I just like stalkers and prisons — which ended the discussion right there and then. 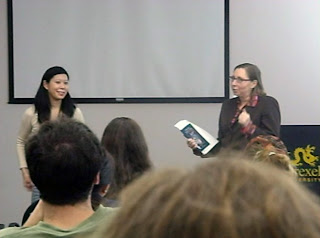 Here we are, thanks to John V who came to Philly all the way from Minneapolis just to be with us. He took pictures (and video) of our last reading at Disque 109 in Drexel University. We had some mints, but no liquor.

On top of everything, I also had a great time in Philly because, apart from going museum-hopping with John V, I also found a playmate in Valerie's M. Isn't she adorable? She has great fondness for (1) Egyptian culture, (2) A's lingerie, (3) eyeballs on a toothbrush, and (4) butlers. 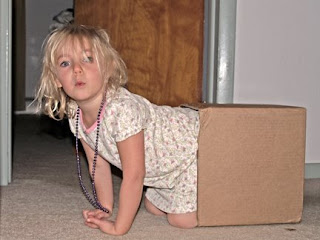 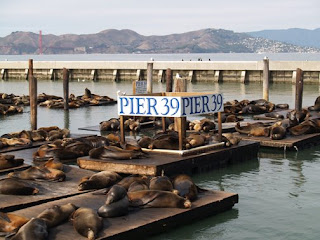 Had clam chowder. Drank wine. Went to the Museum of Modern Art and Chinatown. Had six kinds of oysters. Drank wine. Fell in love with the Pier 39 seals. Had crab and lobster. Drank wine. Walked six blocks uphill to Lombard Street. Did some heavy breathing. Listened to my heart attack. Drank wine. Had cioppino. Had hangover. Spent the day in the California Academy of Sciences. Drank water. Had dinner with Meg Pokrass. Went to Sonoma Valley. Drank a lot of wine. Had little to eat. Watched the sister snore in the car on the way back. Had water. Devoured a burger (medium-rare). 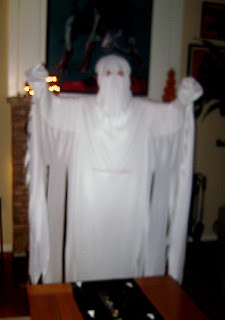 This is me. Really. I was one bad-ass ghost. I stood creepily behind the screen door and waited for the children. At some point, I had to remove the head covering because they were avoiding the house and my sister needed to get rid of the candies. The brave ones who approached me ran for their lives as soon as I handed over the sugar. Bwwwuaaaahaaaahaaaaaahaaaa!

Valerie and I were interviewed by Robert Watts about our Bundles book in ASK (The Journal of the College of Arts and Sciences at Drexel University).

If anyone's interested in a copy, it's already available at Amazon.com (just click and the link should take you directly there).

We are also offering discounted author copies, dedication included, for $12 — postage and handling (hehe) included in the price. Feel free to drop me or Valerie a line.

• When The London Magazine wrote me, they mentioned strongly considering my poem, Agasthya-Tirtha Lake, Badami for their Anglo/Indian issue. On Halloween, they invited me to their November 14th issue launch... so, I take it that I did make it into their pages... right next to an SMB ad: for all your corporate and personal tax advice. Tickles!

This is one fancy print journal, too. And they're accepting e-mail submissions now. The only drawback is that they reply only to authors whose work they're accepting. It's worth a try though — I don't think they keep backlogs, and it's probably safe to assume that once their next issue is out (depending on which issue deadline you met) that your work hasn't been accepted. I used to send by post and this is my first encounter with them via e-mail. You do get a receipt when you send them work via e-mail — a day or two later.

• Blackbox Manifold accepted three poems, Polish Dancer Prelude (one of the serial Chopin sonnets), The Local Physician Returns to the Ski Lodge and The 38th Secret Love Poem for their January 2009 issue.

BBM describes itself as an online forum with a slant towards innovative poetry that has prose, narrative, or sequences in its sights. That said, they seem to have very eclectic tastes — from experimental to narrative free verse to formal poetry.

• Merge accepted three poems: Apple, At the Checkout, and Leak for their Fall/Winter 08/09 issue.

This is a gorgeous print and online journal — held up by deliciously eloquent poetry. You just know you wanna mate... I mean, MERGE with it.

• Issue 8.5 of Diagram is now up, which includes my poem, Shipwreck. Everyone's probably tired of hearing me say that this is one of my favorite 'zines, the better half of my brain, my pet x-ray of lung, my undying love for all things dead.

• The 7th issue of Parameter Magazine is also out. It is a UK-based print journal — with the contents, fiction, poetry and reviews saddle-stapled individually. A driving student conceptualizing rain as well as reasons for not writing poetry may be chanced upon at their website.

Wow! What a post. I'll find you a Goodreads and friend you. :)

Hi Arlene,
Love the photos, especially the ghost one and the blurry affect ; )and the seal one - wow! do those seals really hang out there as if nothing...must be wonderful to see ...your trip sounds great...: )
And your successes are unbeatable! ; ) I tried The London Magazine but have heard nothing so far...I guess that means the obvious...and I must check out goodreads too or is it just for those who have a book??
Arlene, you are taking the world by storm...next stop...who knows?? Would be great to have a European tour?? : ))

I really like Diagram too.
Shipwreck has some really great language and images. I especially liked the line:"Even water has a pulse."

I've never figured out how to get more than one poem in the submission screen at Pedestal! I guess I will have to figure it out one of these days. LOL

Any tips on that one?

I love the ghost costume...and Valerie's kiddo is adorable.

Glad you had a nice visit to the area. Those seals (actually, sea lions) are noisy ones. From nuisance to tourist attraction! Fun to watch them squirm over each other -- especially the wet cold ones tromping across the ones all cozy and dry in their sunbathing.