Physically back in Italy...

... but sims2petting around with the laptop in bed ALL day and night. One of the things I hate about vacations is that, with age, I need another vacation to get over my vacation. Hee.

The husband came home last Saturday from his dinner out and snickered, "You haven't even moved from there since I left." For a moment, I got this mental picture of that geek in a CSI episode who was found dead in front of the computer because he couldn't make himself leave the game. He stopped eating and guzzled beer until his liver conked out on him. Not that I drink beer, but I got the picture.

Hopefully, this time I can glue myself back on my squeaky chair in front of the G4 and get some serious stuff done — like replying to fe-males, bogging, writ(h)ing pottery, whatever.

• My word poem, The Woman in Teal Pyjamas is now up in the April/May issue of Eclectica. 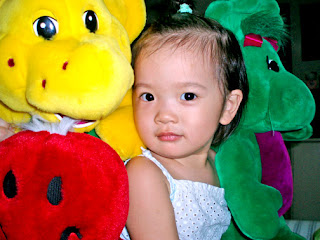 Since the family has got a hang-up on A names, she is A5. And what does A5 like? Sharks, vegetables, make-believe preparation of burnt meals, referring to herself in the third person, playing blocks with her favorite aunt (A4), posing for pictures, and bathing her rubber cockroach (obviously A4's gift). She's weird enough to be adorable. 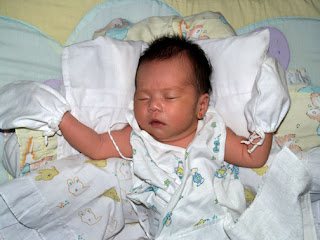 The two-week old A6, fed and burped, in deep meditation.
Posted by Arlene at 10:55 AM

Hey Arlene, great to see you back : )

Muchos congrats on the pubs.

Things are quiet on the 30:30 front just now...there's a comfy seat free by the bay window with the sea view ; )

angelic and small agony are both very cute, and well worth visiting!
nice to have you back in europe, though. cheers

hey AWOL, my dear wife, congrats, and - does A6 actually have a rest-of-the-name attached to the A?

Miss Arlene, welcome back (to blog-land, at least!) Your niece is gorgeous!!!!

hey - are you guys related to dutch crown prince? he's giving all his girls A names, too.