It's the Year of the Rat! 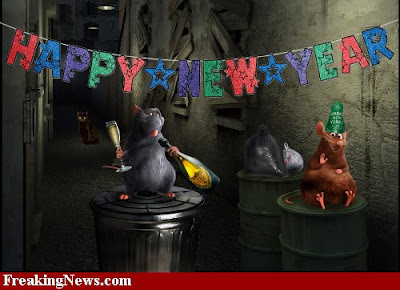 Here's to wishing everyone a wonderful Lunar Year ahead — with lots of great surprises, charm and luck.

Sliding slowly back to normality:

Got back last Saturday. Didn't really feel much like blogging or doing social work (what I've come to call my mailbox and phone book). Not really sad or even brooding, just all very Mark Ehling's I Seem to be Dead Inside.

My mom passed away on January 11th.

She was practically only waiting for me. When she heard that I'd already arrived, she stopped eating and just let go. It was, I think, a good death. We had some nuns come over who "lifted her to the light" with their prayers and mass songs while she was dying. It was agonizing to watch her slow slide into death, but we (including my mom) agreed that death was preferable to the pain which had become excruciating and almost impossible to manage in the last few weeks. 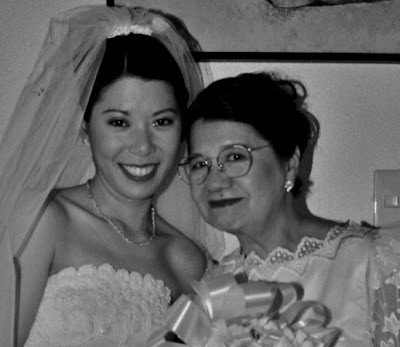 Here we were clowning around a few hours before my wedding (2001).

She was buried — wearing that dress in the photo — on the 17th after a 6-day wake. I was practically living (and sleeping) at the funeral parlor since my brother and his wife had to go home at night to be with their kids. My job was to entertain the guests during the day because tradition makes them expect to be entertained, offered food and drink, etc. Rather draining. Afterwards, we all decided NOT to have a wake once we're dead. Just cremation within 24-hours. Spare our loved ones, puh-lease.

Finally attended yoga class again last Tuesday. And glad I did. It gave me a bit of pep — enough to go back to blogging, answering my e-mail and limit my daily staple of PC games. Eventually, I'll get back to writing and submitting — haven't done either in like two months.

Parameter Magazine, a UK-based print journal accepted three poems, A Driving Student Conceptualizes Rain, My Gorilla Suit Was Outfitted With Two-Thousand Christmas Lights and Luckily, Near Memphis in a future issue (probably issue 7) due out in Fall 2008.

• My poem, Agoraphobia is in the January 2008 issue of The Chimaera. It's kind of creepy how it foresaw my mom's death prior to it happening.

• Have got a kinky poem, Please Meet My Breasts in Issue 45 of Rising — a UK-based print journal edited by Tim Wells, who was so kind as to invite me to send work. Fellow blogger, Rob's got stuff here, too entitled Hangover Hotel. A poem after my own heart. Hee.

• With much gratitude to the same Tim Wells who submitted on my behalf, have also got my Driving Instructor’s First Gastrointestinal Cramp finding its page in Pen Pusher (#8) — a terrific flat-spined, UK-based print journal.

A decided to bring home some fresh kefir grains again. In a sealed plastic container. Saran-wrapped. In her checked-in luggage.

A has learned her lesson. A hasn't yet finished hand-washing her soiled underwear. A hasn't yet scrubbed down the interior of her luggage in the shower like a dog. But she knows. No more traveling with kefir or other micro-organisms. The husband has put his foot down — on the stench in the hallway, on the kefir in his duty-free cigarettes.

Arlene, I'm so sorry for your loss, but relieved to know she's not suffering any longer. All my love to you and your family.

My condolences, Arlene -- and welcome back.

I'm sorry, too, Arlene. The death of a mother is so hard to take.
Condolences to you and yours.

thanks for the sym-empathy everyone.

warm hugs to all,
arlene

Arlene,
I am also sorry for your loss and offer my condolences. I'm glad your mother is no longer in pain and I also understand the idea of not wanting a wake after entertaining so many people during dark hours. I give you my best wishes. Take care of yourself and get plenty of sleep.
Sincerely,
Poet Hound

I am so sorry for your loss, Arlene. But I'm sure it's a blessing to know that your mother is no longer suffering. My best to you and your family.

sweetheart, i only just read. i have been thinking of you a lot, and wondering how you were doing.

i am sorry to hear about your loss, but for your mother it was probably best to let go. and you, you have been very brave.

sending my tighest hugs and hey, you know, if you need anything, i am here.

btw i love that pic!

I'm terribly sorry to hear about your loss, Arlene. That's a beautiful picture of you and your mother. It sounds like you are holding up well but know I'm sending my very best wishes your way. Please be well.

I am so sorry for your loss. May you find peace and comfort.

all my best,
nanette

my deepest condolences, my heart goes out to you at this time, i am sending you a big hug, and the offer of a shoulder. keeping you in my thoughts and prayers.

Sorry about your mom, but it doesn't sound unexpected. I loved the "red straw" that rolled under the bed in Agoraphobia.

Hi Arlene -
My condolences, too. I hope the coming months restore you.
best, sarah

I cry with you Arlene. Losing a mom is the worst thing ever. It's sad sad sad for a long time but the first year is the hardest. Death is such a bastard and he says 'See, there is no purpose in anything.' But eventually, purpose is as purpose does and we pick up our pen because, well, it's what we do.

Also just realized that your poem in Blue Fifth Review is listed as a finalist for Best of the Net. Certainly a deserving piece.

Arlene, I am very glad to hear from you, thank you for the message you have left in my blog, I have written again about you in it.
Hope you'll be back soon with a new post.
Davide

I'm so sorry to hear about the loss of your mother. The loss of our parents runs deep. What a beautiful photo of the two of you.