Have been ogling at this cutish alien since last night. It just tickles me silly every time he grabs his eye to look at me and sings himself purple to Bill Wither's Lovely Day.

Am celebrating a day's rest from 30:30. Finished my fourth round last night

with the following poems —

Hope everyone is having a great Halloween. I'm dressed as myself, of course. And dancing around with scissors because:

• We've got a new cd/mp3/dvd player. At last. Yay! The old one appeared to be Billy Joel's #1 fan and refused to play other cds for well over a year. As much as I love his music, there comes a point in one's life when —er— enough's enough.

• The husband has brought home two kilos of these small buggers for me to cook, cut and trim with my trusty cuticle scissors for tonight. Have never figured out what they're called in English. 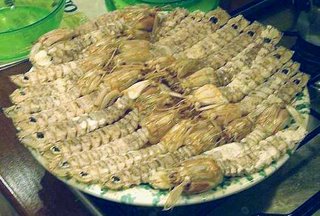 In Italian, they're canocchie. Canocce, in the Venetian dialect. The bigger version, found in Manila, is called sea mantis on the menu... but I'm not sure if that's correct. Hmmmmm.... Any ideas out there?

and attic - happy halloween from one witch to another.

Yikes! I have no idea what those are, but I'd probably run screaming if I saw one in person. Congratulations on finishing another 30/30 round!

Oh love the alien and his tapping foot : )

I think they could be king prawns even though in the photo they look more suspect :)

and they are called pjeospqs.

doing research for a poem, i came across a picture of those horrid-looking creatures, and it says they are called "mantis shrimp".