The village idiot missed her flight

It is a sad and shameful fact, but there it is. What still continues to escape A's logic is HOW she could have booked, printed her itinerary (three times), checked-in online and STILL got her flight hour wrong. Stooooooopid, stoooooooopid!!!

To make it brief, she COULD'VE SWORN (remember Zurich?) the departure was at 6:40, when it was in reality 6:20. She and the husband got to the airport just as the plane was about to depart. She was given the choice of taking the flight, but leaving her luggage behind or re-booking.

Because the contents of her luggage are of greater interest to her brother and his wife than she is, A decided not to risk appearing in Manila without (1) four boxes of Christmas "bread" with chocolate filling, (2) three packs of cookies with chocolate filling, (3) three instant mixtures to make pudding with chocolate filling and (4) two bottles of mandarincino (orange-flavored liquor) that her family nagged her to bring them. There's a kind of pattern here that doesn't seem normal, but it is not A's place to question things that are family.

It is true that A had been acting strange prior to departure. She appeared to have gotten into some kind of time warp and got stuck in Wednesday, the 28th for a whole week. She kept calling home every day since Monday, the 26th and telling whoever answered the phone that she was coming home "tomorrow". A realizes all these things now. Early this morning, during sleep, she snapped her jaws and woke up biting her goosedown pillow. She's had to pay a huge fine, after all.

At any rate, A has been rescheduled to leave on the 30th. Which is today. She thinks.

Looking at the positive side —

• The ground stewardess who re-booked her flight complimented A on how well she was taking it because "others" usually take out their frustration on her. She didn't know she was talking to an alien. Anyway, some plane jokes were exchanged. Another ground stewardess joined the party and everyone had a good laugh. However, when they said, "Arriverderci!" the husband butted in, "Well, we certainly hope never to see you again!"

• At being told the news, A's family and the husband's family laughed themselves silly over the phone. They thought it was better than reality tv.

• A managed to reduce the pile of unwashed clothes to waist-height (hers). She hated leaving the husband to do all the housework she never did. His smug declaration was: Now I can clean up the house without having you dirty it immediately. Really. Talk about delusions of orderliness.

• A got to finish her bottle of Marzemino. She has no qualms about bad-mouthing her brother's wine in public because it's so bad that she actually prefers to remain sober. During the holidays, too.

• A received Only Connect, a gorgeous 128-paged anthology recently published by Cinnamon Press.

• A has wrapped up her 10th round at 30:30 and is slumping into 100% vacation mode. And, because of this, A can watch as many in-flight movies as she can stick into the twelve-hour flight from Amsterdam to Manila without once going, "What to write, what to write."

• And last, but not the least, A managed to mail her chapbook to the people who requested a signed copy. YAY!

The package arrived on the 27th — it was the COD package because the publisher made the mistake of declaring the retail price of the goods (CAN$70). Even though it was marked it as a gift, the customs people still considered it taxable.

So, a word of advice to people who are sending stuff overseas: Just declare the sentimental value of gifts you send through the post and not their retail value.

• Agenda, a UK-based 'zine accepted three poems, Under a wide flounced skirt, Sunday Bath and We are rarely prepared for various issues online.

They accept only hard-copy submissions — but they respond via e-mail.

• Have got eight images in the new issue (#5) of Siren. Was so thrilled to find three poems by Valerie Fox here!

Well, that's it. I'm outta here. Really. I can do it. I'm off to catch that plane today. I've an extra-large fly swatter.

Gaaaaak. Have decided to go home at the last minute and spend Christmas there. Am leaving on Wednesday. My mom still hasn't gotten better. She's in quite a lot of bone pain... which isn't a good sign.

Have been trying to wrap things up here, laundry- and email-wise, but seriously doubt I can get everything done before I leave. At some point, I think I'd have to start packing.

Need to be at five different places tomorrow: yoga class, the jeweler's, the supermarket, the pet shop and the post office — got a strange note today that a C.O.D. package arrived for me. If it's about my chapbook copies and they're taxing me, I'll scream and start eating my winter coat (from collar downwards).

They accept only hard-copy submissions — but they will respond via e-mail. They've got an admirably fast response time, too!

• The Chimaera accepted my poem, Agoraphobia for their January 2008 issue. This is one slick 'zine. And they're including mp3 recordings, too. Did mine this morning — with sound effects. Heheh. An alien can't be heard in public without fancy storms and some glass breaking, can it?

Am so thrilled to see Non-other-than-X in this issue. It makes it easier for an alien to abduct her when she's surrounded by other people. Where I come from, Nachos are served with jalapeno sauce. 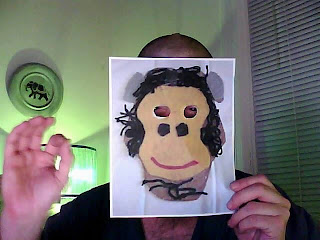 John Vick was such a darling to send me this picture of him while he was reading my 30:30 poem, I'm not supposed to wear this gorilla costume. The gorilla's face is shaped like a mutant potato, and something about that just makes my day every time I see it. If you want to get a huge laugh and see John in action, click here.
Well, this other gorilla is outta here!

Posted by Arlene at 5:50 PM 3 comments: Links to this post

Somebody we know raided...

... the PlayFirst site two weeks ago and has been at it ever since. It is all very shameful and shameless, like that lascivious not-so-handsome prince in Fairy Godmother Tycoon. A's official reason is she's just scouting for good computer games to present her niece as soon as she comes of age (not for another 10 years).

So, what else has A been up to — apart from metamorphosing more and more into Lex, that bookworm with orange glasses, helium-packed voice, green pallor and too many tongues in one cheek?

• On October 29th, A gave in to her baser instincts and fell off the 30:30 wagon. In three days she played Chocolatier, Plant Tycoon, Wedding Dash, Build-a-Lot, Cake Mania and Burger Rush. All rather silly games, but she managed to scratch that itch until it bled and stopped itching.

• A picked her scabs off the floor and returned to arranging them on paper (called poetry). Today is day 11 of Round X. Again.

• After a brief vacation, A is back in the novel-writing sandbox with her favorite playmate, Valerie. We have, more or less, reached the milestone of 20,000 words. There's been a lot of conjecture about God and wine. At some point, A made the hero write: I'm not sure I don't believe in God. After all, I believe in wine.

• Because she fancies herself a fiction writer now, A is trying to inject dialogue into her everyday life. The trick is to pretend it's just God wanting more wine or the wine wanting more of God.

• A had to operate on her laptop because its internal fan was making all sorts of indecent helicopter noises. Inside, she found tons of fluff.

Fantastic, A muttered, a computer who gets hairballs.

What did you expect? Your laptop fan is the closest thing we've got to a vacuum working around here, the husband quipped.

It was a good thing that after the operation, the laptop has had the good sense to keep silent. The husband has been silenced as well. Like God or wine, dialog may have deleterious side effects where a spouse is involved.

• A spent a couple of days photoshopping more pictures for the upcoming issue of Siren. In the process, she realized she's an awful photographer. If there's any straight line in the picture, she's bound to get it crooked. Her eyes were so disgusted after the first day that they gave her a migraine. Pure spite.

• Even though A hasn't driven in over a year, her reputation remains alive in everyone's hearts. Because of the tighter alcohol control on Saturday night drivers, her sister-in-law's husband proposed to make A drive them home sober — this to prove to the authorities that it is actually dangerous to be sober while driving.

• Not a peep out of A's Secret Love Poems chapbook copies yet. She suspects it's become a post office love secret.

• The husband emerged victorious from a smit fraud virus battle (his third). It's a really scary beast because it gets through despite all the anti-virus programs we've got on and once it's in, it deactivates them. A was cheering him on through it all — because she knows it's just a matter of time before her laptop catches it, too.

I'll charge you heavy for the house call, you know, the husband snickered.

You can't, A replied sweetly. We live in the same house together. Plus, you're the husband. I get to use your services for free. It's in the constitution.

• What else? A has decided to do the laundry today... before the pile of dirty clothes topples over, buries her alive and takes over the house and her recently opened Restaurant Empire.

• Came across Poet Hound while fooling around with my submissions. It's a blog dedicated to connecting people to poetry whether it be for the first time or attracting seasoned veterans. Some really fab market reviews. If, like me, you wake up some days and don't know where to send your stuff, let the pooch lead you to it!

• Mascara Poetry is a neat 'zine which publishes a wide range of styles and voices. They're particularly interested in the work of contemporary Australasian poets, but consider work from around the globe. The keyword with them seems to be innovation.

• For people who haiku and senryu their hours away — Roadrunner Journal may just make the Wile E. Coyote in you howl.

• Taiga is a print journal scheduled to go to press in the Summer of 2008 and are accepting submissions for the their first issue until February 29, 2008. Based on what I've gleaned, they seem to like poems that are crisp, clean and eerie — humor is seen as a plus.