An excerpt from The Little Lantern Girl: 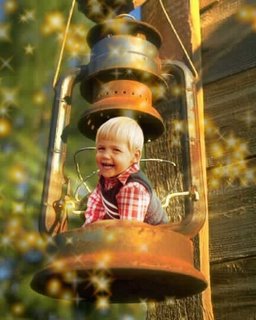 On her sixty-third birthday, Susan began believing in fairy tales. She was a phlegmatic woman with her own vegetable garden. When she ran out of Cinderella stories, she made up her own as if it could make up for the tenth driving exam she failed to pass.

Every weekend her grandchildren, ages somewhere between four to eleven, flocked to her door armed with flowers. She often described her life as a Frenchified farmhouse once upon a time. Something about the way she said this always frightened them. Elaine, the eldest and bravest, was paid a dime by her parents to say, "Please tell us about the little lantern girl, Gramma."

Bwuaaaaahaaahaaaaa!! Let's see if I can find an editor for this silliness.

On a more serious note: 4th driving lesson scheduled for tomorrow. Don't try to deny it, I know some of you are already calling 911. I know by the sound of you out there cutting your toenails.

After re-tracking my conversations with people, I'm rather sheepish to say that it's probably my fault people mistake my name so often. I think I've managed to convey a lot of negative subliminal messages on the importance I place in my name—

Arlen, that's hilarious - but Micky may not think so.

Good luck with your 4th lesson. I think lesson number 4 is "how to drive on sidewalks."

arnele, thanks again, the pics are cute. i would love to read the rest of the story, so if you don't get arrested for drunk driving today, please do finish it and get it published.

and how did you know i cut my toenails today? you psycho you ... er, psychic of course. *tee-hee*

ps - i think it is very generous of blogger to let me "choose an identity". *giggle* now, today, i think i will be pimujo. yesyes.

I think this one is my favorite - michi looks perfect in that lantern!! too cute.

"a Frenchified farmhouse once upon a time" is wonderful. Enjoyed the read.

ha! you all think arlene put me in that lantern with her magic tools, eh? if you knew ... *L*

Talulah,
love the michi photo. what a cute girl.
Funny about the name. Maybe it's that generous acceptance of all transmutations of your name that's what's made you so versatile?
smile

carl: erm, lesson 4 was more like "how to hit two parked trucks in one turn." aaaargh!!

monkey: me, psychic. you, psycho. understand? don't eat your toenails. here, have a banana. hee.

thanks for reading, sam. let's see if i can finish it.