Made all the same mistakes I made the last time. Maybe worse. The driving instructor was particularly chatty and I had a hard time keeping my mind on the foot pedals, gears, etc. while trying to understand what he was saying, like why I shouldn't cross an intersection the way I just did or something theoretically complicated like that.

On the other hand, I was booed Assassina! only three (3) times. He did call me lazzarona when I mistook the gas pedal (again!) for the brake and accelerated while turning a corner.

Not sure what it means, except that it's a word I always hear my in-laws tell the pooch when the pooch does a BIG foul-smelling no-no in the house.

Not sure if I'll get past this third round, but I rather missed writing. Going through a sestina mania now. I also need to prepare a sub for POM2. By the way, if anyone out there has intentions on subbing, the subject header has to be: "juice" -- or your submission might end up in their trash. I don't see this word on my browser, but it's written in my copy of the journal -- which I received some days ago. Neat poetry!

1. And she said television
2. "Manic car driving is not a door stop" —Gale Nelson

As if to show that I shouldn't really be allowed to drive, I've just been welcomed with open arms to the Mad Hatters' Review. They'll be showcasing six poems in their 6th issue. Yay!

• This umbrella handle is J
• A Room of My Own
• Dr. Lecter on His Couch
• Undressing As Rehder
• Birth
• The Author in the Third Person 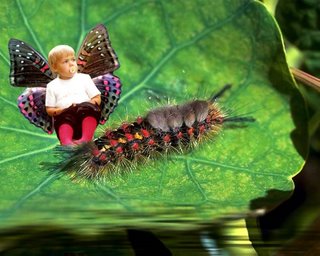 Michi and Angela in those wonderful pre-Nigel Bayesian days. Poor Angie, she was a slow grower. Michi, of course, pretended to wait patiently, but she already had her eyes set on someone with strawberry-blond toupee in the horizon.
Posted by Arlene at 12:27 PM

it's okay to suck at driving (unless you actually kill somebody) as long as your writing is successful. congrats on the MHR acceptance!! aha, another 30/30 round. i have been thinking about doing one, but i sleep so little at the moment, that's doing my head in, making me braindead, highly uncreative. blah. even the poem title generator is at a loss when it comes to suggesting a title for me.

ah well, trying to *wake up* so i won't talk nonsense to my english students.

I'm glad you've come back to 30:30. I'm almost through this round and it feels odd, like I've been sleepwalking (or writing), because I've had so little time to spend on my poems that I just zip most of them off in a few minutes and post them before I get distracted and forget. I feel strangely unfocused and focused at the same time.

And CONGRATULATIONS on the Mad Hatters' Review acceptance!! They *ahem* sort of asked me (nicely) to please not enter their Wicked Alice contest for a bit since I won twice in a row. I think they're afraid people would think it was fixed or something. So maybe I'll have to go for straight submissions next time they're reading. I can't wait to see your work there!

mulchie, thank you for the encouragement. you're such a sweetiepoo. (learning flighty debutante talk from the peter shaffer play)

hope you get more sleep... and get back to 30:30 before i fall off the wagon again. i'm sleeping less, too lately -- told L that i must be feeling my age.

sharon: thanks! delighted you like the pics. and hey, a wicked alice contest?!! if you've already written your poems, wicked alice has got a call for subs for their "alice" issue (deadline: august 15). should be fun!