The dead has risen... 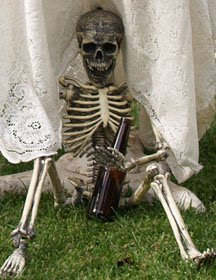 ... and it is drinking. It has recently been quoted to say: Just being alive should make you late for everything. In case you've never noticed, the dead are always on time.

Time, including the passage of, is all in the mind of strange moving creatures. Hence, since the last blog entry, no time has passed at all and there is no need to feel sheepish and hide under the table.

As Nabokov (dead) would put it: I confess I do not believe in time.

• Have finally retired the G4 and gotten a 24-inch iMac. All I can say is that there's nothing like "the" Mac experience... oftentimes compared to dying and going to heaven.

• Have cloned myself on Facebook — for the gaming purposes — and have begun to exist as my clone 95% of the time. At some point, I removed my clone from my friends list because of her insistent game invites. It's sad, but true: I'm longer FB friends with myself.

Having multiple FB identities is probably the modern way to experience split personalities since only one consciousness (per browser) can be dominant at a time. Hee. It's a rather confusing experience.

• Last Friday the potato chips and nuts that my sister mailed me on 11 December 2008 finally arrived. The box had the seal of the Deparment of Health... as if to say this could be swine flu. The customs people even made me sign a month ago that I will be held responsible in case of an epidemic or something. Hee!

Acceptances, from most recent to oldies:

Incidentally, they have launched a poetry competition (no fees attached) with the Latitude Festival 2009. First prize includes a chance to read on the New Voices stage in the prestigious poetry tent at Latitude. Goal is to write a poem about where you live. More info at their website.

• Thieves Jargon plans to publish the cheeky poem, A Driving Instructor's First Experience with a Tango Teacher in an upcoming issue.


• Thanks to Liz for mailing me a gorgeous copy of The Stinging Fly, I decided to send them some work myself. They accepted two poems for publication in a future issue: Apple, Pear and the Body Running Through Them and Suffocation Prelude (sonnet).

They're currently closed to submissions now and will be open again from January 1st to March 31st.


• Weave Magazine — a literary print publication and organization based out of Pittsburgh — accepted a poem, Feeding the Husband for a future issue. Payment is one copy. Very quick response time, too!


• DIAGRAM accepted a prose poem inspired by the James Castle exhibit in Philly, Unidentified dark object (with shoelace) for an upcoming issue.


• Holly Rose Review accepted a poem, Things She Told the Rooster Before It Became Glass for the Passion issue (#2, June 2009).


• Oranges & Sardines accepted three poems: The Girl in the Bathtub, Ownership, and Disconnection for an upcoming issue.

This is a lovely 'zine with fantastic poetry. And quite new, too. They're currently only their second issue... but it's fast becoming a favorite.

• Inertia Magazine, a literary journal based in NYC, accepted Roadside Motel for their Issue #7, slated for release in July 2009.


• Boxcar Poetry Review accepted a poem, Living Without Water for an upcoming issue.


• Found out last April that my prose poem, Family was accepted for a future issue of Drunken Boat. Never thought I'd live to see the day... plus anything with the letters d-r-u-n-k in it makes my cuppa poison.

The downside is they can't seem to send me an e-mail. Have changed twice now and they've sent the acceptance e-mail twice, but nothing. They seem to have fairly quick response times... my advice is to just check your submission regularly on their database manager in case this should happen with your e-mail addy, too.

Publications, from recent to oldish:


• Have six poems in the Fantasies issue of Succour — which went out on 11 May 2009. It's one of the print journals I've discovered through Facebook via friends of friends of friends. FB does have its neat uses. Poems list:

» The Self in the Mirror is a Test
» Please Meet My Nails
» I'm Only as Half-Drunk as You Think I Am
» twelve: crackle (from approximative translations)
» The dog in the rearview mirror
» What the postwoman can't fight


• The Summer 2009 issue of Rattle is out! People have been writing me to say, but — again — I still haven't gotten my copies. Will keep my fingers crossed that they get here before Christmas. My poem, Tonsillitis is in there aching.

They've also got a call for subs on Sonnets for the Winter 2009 issue. So get those da-DUM da-DUM nuts cracking.

• My first published flash, The Dreaming Lake came out in the March-April 2009 issue of Oak Ben Review.


• qarrsiluni published some poems and fiction that I co-wrote with Valerie:


• An oldish poem, Memento Mori made it into the 20th issue of Blue Print Review: The Missing (hehe) Part.

That's an assload of acceptances, if I may say so. Congratulations.

Also, careful about cloning yourself on Facebook. They can kick you off for that.

I was planning to order that issue of Rattle. I wanted to see what Scott Woods got in there.

Goodness, Arlene, your publications are increasing like some mathematically unstoppable equation where words like
' exponential' hang out...brava! what a poetry feast! Delighted to see you in The Stinging Fly - I'll be in there again too, hope we get to rub poetic noses : )

Why should U love our hot-shot, fuse-blowin, abundant-X-acto- productivity? our copious exploits? our lavish, madhouse bookay? our proFUSE NRGod which leads to explosive fairy-tales in the 'one-stop-shop' symphony: the BigDude, the Owner of ElysianFields, the Prize, the Austere Overdrive, NoPurchaseNecessary??? our bombastic tenaCITY on a Hill which'll plant the Seeds 4U2 grow-up to great heights?? Follow us...

CAUTION: our 22ish, wildchild, accurately-atrocious, offa-the-reservation-like-Jimmy-Hoffa, metal-breadKrumm-blogaZZZms R so awwwsome, they're an intimate wealth of bottomless sophistication. Go ahead. Report me. Yawn. But, yet, here's the KOO D'TAH: who else hast SEEN the Great Beyond in spirit & lived to tella youse bout the bionic, bloated, brevity-like-earth we're living on?? Yes, earthling, I was an NDE, almost salivating4salvation. So, gain altitude, never attitude: death has no favorites.

If Mr. abSUREdity's an ultra-great-reward, but not everyone enters, Q: why is it an excruciating deluge of epic caliber where the quality's a limitless bulldozer plowin, pushin-your-power-cord with eternal goodies?? A: the Prize-a+-TheEnd just gives U.S. moe-curley-graFixx 2C the VitSee: an explosion-of-extravagance which few R asking for anymore! They're too concerned withe grotesque sanity of the ambivilant piss-ants which swiftly crawl like lemmings to their destruction. Grrr.

THANK GAWWWD!!! the Don has the ebullient BAWLS!!! to do the Manifest Destiny!!! To lead U.S. forward to the White House Upstairs with his SQUARES!!!

So, break-free, earthling; be like a contraversial outgrowth of incredibly-intoxicating-effusiveness in your zeitgeist. Wiseabove. Wanna join this useFULL idiot Upstairs for the most zany, kooky, handcrafted antidotes? Extremely exquisite and explicit endorphins in abundance? Puh-lenty of pulverizingly-tantalizin psychosomatics with eXXtras? i2i-kick-ass-ultra-maximum-rocket-fuel-party-hardy at my pad ya ever encountered without d'New Joisey accent 4 an eternal slew of precarious, magnanimous and primeval absurdities etched in the Granite Corridoors of our eternity with a total-barrage-of-melt-in-thy-mouth indulgence eternally ...???