Swatting at swarms of bees

Just when I thought this month would be spent in leisure, things change. For one, have finally decided to concretize my October visit to the US — will spend some time with the sister in CA (drinking in Napa Valley at the topmost of our to-do list) and some time with Valerie in PA to promote our book (she mentioned bar readings being more fun since we could drink). There's some kind of single-mindedness about this trip, but I can't put my finger on it while holding an empty glass.

The bees that A has been killing lately — 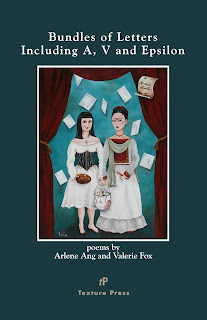 • Finalized Bundles book cover. Ain't it gorgeous?!! The painting, Kindred Spirits is used with the kind permission of Pamela Hill/dzaet. The mss, on the other hand, is still in the process of preparation — the 8 x 5 page size rather messed up with our longish lines, so we're editing a bit to give the aesthetics more bite. Who said men are the only ones who've got length problems?

• Answered interview questions for E-Learning Queen in an orderly and concise manner that shouldn't betray the percentage of alcohol in my blood.

• Exercised the right to vote for the first time in my life and as Italian citizen. Yay!

• E-mailed around to request permission from people whose works I quoted in my other book (see below again).

• And before all the bees broke loose, finished modding Guild 2 to suit my evil deeds — like beguiling the opposite sex so they vote for me in elections or not going to prison after murdering someone in cold blood.

• Cinnamon Press accepted my book-length manuscript, Seeing Birds in Church is a Kind of Adieu. Wheeeeee!

After accepting my poems for Envoi, the editor hinted that she'd like to look at a full-length manuscript for possible publication under Cinnamon Press. It was really good timing because I had the ex-Lean Season mss in my Outbox just waiting for revision and for me to decide where to send it.

Publication date is scheduled for March 2010. Hee. Just thinking about it gives me Alzheimer's. But it does leave me ample time to track down people whose work I've quoted in the book... people like Robert Frost and Tolkien who —erm— happen to be dead, but whose estate might want us to pay a fee for the usage. Good grief. This rather cures me of wanting to quote anyone dead or famous in my poems ever again.

However, the husband put it another way to me: Since we will be selling the book, and theoretically, aiming to earn from the sales, it seems only ethically correct to pay for the usage of someone else's line on the basis that we are getting leverage from it and the famous person's name. Kind of sounds better and more logical in Italian, but there it is.

• Dirty Napkin accepted two poems, The 37th Secret Love Poem and (hehe) This dirty napkin for their Summer issue, due out on 21 June 2008.

Really adore this 'zine — very nice professional manners and terrific poetry. They've also got a cool online submission system where you can track your work and also withdraw them (if needed). On acceptance, they request a recording of your work — if you're not equipped, they'll do it with you over the phone.

• Have three poems — Self-Portrait with Umbrella, A Warning about Attachments and Wu Jin Contemplates the Tattoo on a Soft Cheek — in the third issue of Mascara.

• My copies (2) of Georgetown Review arrived this morning. Because the FedEx guy woke me up, at first I thought I was dreaming. They accepted my work two years ago, after all.

One of my poems, The 4th Secret Love Poem may be read online. I can't believe they've got my name wrong on the webpage after getting it right four times in the print journal. It's like a rock waiting to fall. Some days ago a TPM contributor addressed me as Dear Ariene. I tell you, it's a conspiracy. Either that or my name's a finger-twister for typists.

• Craig Kirchner's Roomful of Navels. Wrote one of the blurbs at the back, so I'm rather biased about loving this book. Sample poems in this terrific collection may be found at Lily, Mannequin Envy, No Tell Motel and SNR Review.
Posted by Arlene at 1:06 PM

Oh Arlene, that cover is absolutely stunning!! I can't wait to hold a copy in my hands. And ENORMOUS congratulations on having your book accepted by Cinnamon Press - I'm doing a happy dance all over my house, I'm so excited for you. Can I be in your fan club?

Hey, any chance you'll swing up Oregon way while you're in the states?! Maybe you can talk Valerie into coming out here to Powells for a reading.

Now that you've gotten all that stuff taken care of, when are you coming back to 30/30? We miss you!

And, I can't wait to get this lovely covered Bundles-- *swooonish*

Congrats on the book being almost ready.

Wow and Wotsit! arlene, what fantastic bundles-of-joy news you have...congrats to yourself and Valerie...love the pic - kindred spirits is just so right for a collaboration like that.

And more wild hand-clapping on the cinnamon press acceptance, that is fab and totally deserving.

And a trip to sunny California - that sounds brillaint. I've never been but my brother lives there...one day soon, I'll take that step : )

Good god! All those poem and TWO books being published!? You are a force of nature. Congrats on it all!

A force of nature is right--you and Joyce Carol Oates!