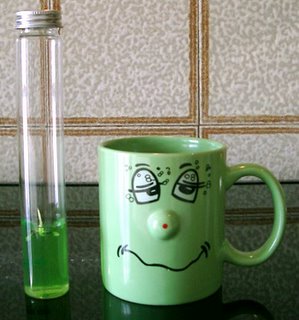 Due to my incredibly boring disposition, I just have to post this picture of my growing plant (Christmas present from a niece-in-law who digs my boring disposition like a spade) and my favorite mug (which eloquently mirrors my morning face). Hee.

Do you see the teeny-weeny leaf? Do you see it? Do you, do you?

congrats! and thanks for the hint! any idea whether RBR accepts simultaneous / previously published submissions? doesn't say anywhere, or i am blind! :)

as far as i know and have noticed, all the poems in RBR are unpublished. don't know about sim subs, but you can ask the editor, wt pfefferle. he's very nice and approachable. terrific poet, too ;)

thx arlene, i did notice that nothing seemed to be prev. published, i will drop the man a line. :) pfefferle sounds like a name from around my hometown, diminutive "-le" is common there, but also in parts of southern germany and west austria. it means "little pepper", pfefferle. :)

Happy New Year to yas. I'd like to invite you to blog a Poem A Day - we're trying to get a chain going. So far two of us. Wanna try it? Here's my linke
http://goodwinspad.blogspot.com/