Recent whatabouts of A — for the curious

Apart from doing a schizophrenic marathon called 30:30 and my TPM/Press 1 duties, I am also guilty of such oddities:

• The mercy-killing (through viral infection) and eventual resuscitation of my laptop. Because it got rid of programs and files I wanted to get rid off but didn't have the heart to remove.

• On my way to yoga class, I allowed myself to be picked up by a strange man, and later, gave him a full-body massage. Teehee.

It's actually a lot less interesting than that, but it's way too ticklish not to write about in public. The guy's actually someone I know (not biblically, sorry to disappoint) in yoga class. The ayurveda massage was part of the yoga class — which involved a lot of kicking on the fella's arms and legs, who took it lying down. All very boring. Of course, afterwards I made it a point to ask how it was for him.

• Have discovered a new use for old sneakers: When positioned correctly, they act as a second night stand and can safely balance up to 20 poetry books. When performed every night for three years in order to allow bed space for a spouse, it may actually lead to enlightenment.

• Yoganidrasana, or the Yogic Sleep Pose (see pic below) seems to be part of my default setup. The keyword no doubt is sleep. Program anything with the word "sleep" in it and my body will see it to completion. 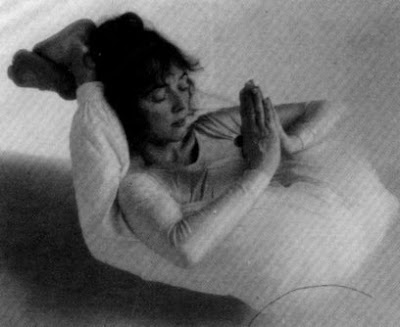 • Revised a collection of 70 poems in one day. Tentative title moved from Lean Season to Seeing Birds in Church is a Kind of Adieu. Probably the result of reading too much spam mail that say I've got length problems.

• Took pictures of myself as requested by the 34th Parallel editors. Nothing topless — sorry to disappoint again. And even if, you'd still need a magnifying lens to see what I've got... only on a cloudy day, too — or you'd end up with stuff that look like dead ants.

• Was thrilled to receive an acceptance note from Envoi that they're accepting three poems: Fallen, Glass and Hush for Issue 150.

This is one of the most gorgeous print journals I've ever had the pleasure of stroking... uh, I meant reading. If you non-aliens out there send stuff now, we can be in the same issue together — the response time remains quick and easy.

• Also received an acceptance form letter from the 34th Parallel editors who are interested in publishing my poem, Time with Frieda in their next issue.

My multiple selves are currently on their hands and knees for —

Ilya Kaminsky's Dancing in Odessa. This is such a gorgeous collection — one of those books that make you stare at the ceiling all night thinking if there's a god, there's my god.

Here's an excerpt from his longish poem, Praise:

A woman asks at night for a story with a happy ending.
I have none. A refugee,

I go home and become a ghost
searching houses I lived in. They say —

against the Church's will and his father's will and
the father of this father. Losing all,

eager to lose: the estate, ships,
hiding this ring (his wedding ring), a ring

my father handed to my brother, then took. Handed,
then took, hastily. In a family album

Then my mother begins to dance, re-arranging
this dream. Her love

is difficult; loving her is simple as putting raspberries
in my mouth.

On my brother's head: not a single
gray hair, he is singing to his twelve-month-old son.

And my father is singing
to his six-year-old silence.

This is how we live on earth, a flock of sparrows.
The darkness, a magician, finds quarters

behind our ears. We don't know what life is,
who makes it, the reality is thick

with longing. We put it up to our lips
and drink.

That yoga sleep position actually looks comfy in that photo!

I got Dancing in Odessa a couple months ago, but didn't read it yet. I'll have to move it up to the front of my reading list.

I am pining away for a massage just now especially those slapping and kicking ones (am a Thai massage junkie)...bet the unassuming guy loved it : )

Good sneaker tip - I can vouch for a similar effect with cobwebby slippers ; )

Congrats on keeping those pubs rolling ...and that poem you quoted is just brillaint...

Oh gawd and that yoga sleep pose - not in a month of Sundays can I imagine myself in it...ouch and ouch.; )
xx

thanks for posting the Kaminsky bit ~ I've added Dancing with Odessa to my goodreads to-read list. :)

You're joking, right? You can *do* that pose??!! My joints are cracking in 18 different places just looking at it!

Congrats on your latest acceptances!
~t
(who is a dead gnat sort of girl herself)

certainly, you can't reach the 34th par. in that pose, armistice. pliancy breeds familiarity, no?

thanks for the dio tip-- shalt add to mine list.

the perpetual wad of blue jeans also do nicely in a pinch for reading desks and shelves.

back to the multiplication (of selves) tables...
o to the x